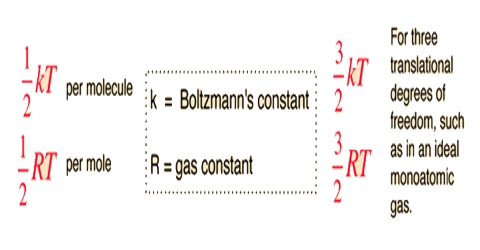 The Principle of Equipartition of Energy

The principle of equipartition of energy states that the total energy of a molecule is divided equally among the different degrees of freedom. A degree of freedom is defined as an independent mode in which a body may be displaced. We know that, the translational motion of a body may be resolved into three components along three mutually perpendicular directions. Thus, a body may have three translational degrees of freedom, one for displacement or motion along each direction. We also know that the velocities of molecules along the three directions may be taken as equal so that one can write, for a molecule of mass m, the following for the K.E. of the molecule;

Or the for one molecule K.E. = 3/2 T.(R/N), i.e., =-3/2 kT; where k is known as the Boltzmann Constant. According to the principle of equipartition of energy the contribution from each degree of freedom to the total K.E. of one molecule is 1/2 kT or that of one mole is ½ RT.

These results are of great importance as they allow the calculation of the total energy and hence the molar heat capacity of the molecules.

It should be mentioned that complicating factors must be taken into account for obtaining correct value of molar heat capacities from the energy values obtained with the help of the principle of equipartition of energy.