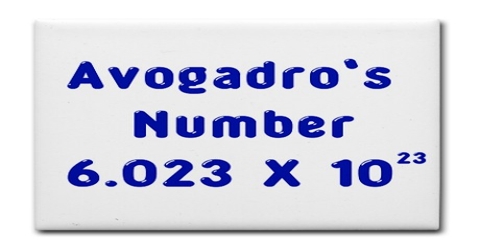 According to Avogadro’s hypothesis equal volumes of all gases under the same conditions or temperature and pressure contain the same number of molecules. This number, i.e., the number of molecules in 1 mole of a gas, is called Avogadro number. It is a fundamental constant of physical chemistry.

The basis for accepting this as fundamental constant in physical chemistry is that different types of accurate measurements based on different principles yield the same value. Some of the experiments which have established the value of the Avogadro number are given below;

(ii) Microscopic observation of the random displacement of small particles. Both (i) and (ii) were carried out by Perrin with different particles and at various temperatures.

(iii) Determination of the charge of an electron by the oil-drop experiment of Millikan and the value of the Faraday constant of electrolysis.

(iv) From the determination of the charge on the alpha particles from radium by Rutherford.

(v) From a determination of the constants of radiation by Planck.

(vi) Direct determination of the wave-length of X-rays.

Avogadro number also enables one to calculate the number of molecules in a given volume of gas or a given mass of substance.