It would be difficult to assign a pour point to a heavy residual fuel oil. This is because, as already noted, it is charged with wax and asphaltenes. Molar weights of the waxes in particular are not far distant from those of some of the liquids in which the wax and asphaltenes are dissolved. The distinction between dissolution and suspension, required for cloud point determination, could not reliably be made. Pour point is however important in the use of residual fuel oils. The oils in the table in section 6.2 all have a pour point of 30°C with the exception of RMA 30 which has a pour point of 0°C for winter use and 6°C for summer use.

This is the least viscous of the oils on the table and has a pour point well below that of the others. There are pour point depressants for residual fuel oils and these work similarly to CFPP depressants for diesel discussed in the previous chapter, that is, they work by preventing nucleation and not according to the principles of freezing point depression. Alternatively, residual oils with different propensities to solid deposition can be blended to a target pour point. 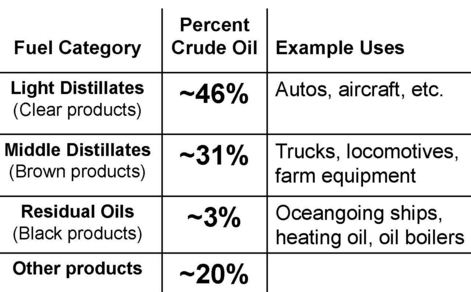 The viscosities in the table – up to approaching 103 cSt – would not apply to any single hydrocarbon compounds which are liquids at room temperature. These will rarely have kinematic viscosities exceeding a few tens of cSt. A crude oil has to be seen as a solution of wax (molecular weights 300 to 400) and asphaltenes (molecular weights > 1000) in an organic solvent, and such a system cannot be approximated by any ‘model compound’.