Markovnikov rule is quite general but not universal. In 1933, the American chemist M.S. kharach discovered that the addition of HBr to non-symmetrical alkenes, in the presence of organic peroxide (R — O — O — R), takes a course opposite to that suggested by Markovnikov i.e. the negative part of the reagent becomes attached to that double bonded carbon which contains maximum number of H atoms. 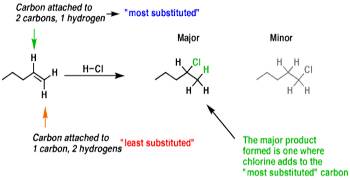