Home Chemistry Justification of “Hydrolysis is the basic mechanism of Digestion” 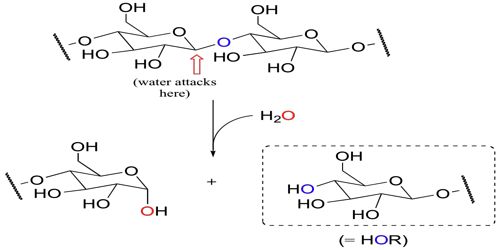 Hydrolysis is the chemical breakdown of a compound due to reaction with water. The term mechanical digestion refers to the physical breakdown of large pieces of food into smaller pieces which can subsequently be accessed by digestive enzymes.

Carbohydrates are broken down to provide glucose for energy. They are nutrients that provide your body with energy. Digestion predominantly occurs via enzymes lining the wall of the small intestine

This process, called hydrolysis, is the following (in which R”-R’ is a disaccharide).

Almost the entire fat portion of the diet consists of triglycerides (neutral fats), which are combinations of three fatty add molecules condensed with a single glycerol molecule. In condensation, 3 molecules of water have been removed. Digestion of the TGs consists of the reverse process; the fat-digesting enzymes return three molecules of water to the TG molecule and thereby split the fatty add molecules away from the glycerol. Here again, the digestive process is one of hydrolysis.

That is, the proteolytic enzymes return water molecules to the protein molecules to split them into their constituent ammo acids.

Therefore, the chemistry of digestion is simple because, in the case of all three major types of food, the same basic process of hydrolysis is involved. The only difference lies in the enzymes required to promote the hydrolysis reactions for each type of food.

Observe the Affect of Temperature on Solution

Test of Purity of Chloroform