Chiral Carbon: If two objects are the mirror image of each other and they are not super impossible, then they are said to be chiral. The simplest type of chiral molecule has four different groups or atoms attached to one carbon atom, which acts as chiral centre, e.g. C*. Lactic acid is one of the examples. Chiral carbon is also known as “asymmetrical carbon”.

For example, the compound shown here contains a carbon atom with four nonidentical substituents; this carbon atom is a chiral centre, and the molecule itself is chiral because it’s superimposition on its mirror image. 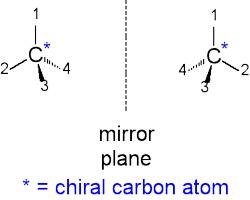