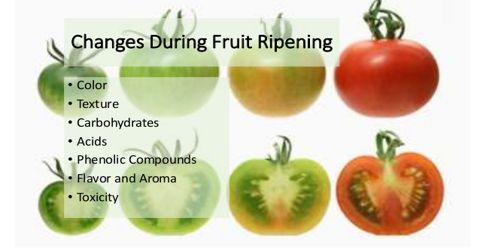 The quick method of fruit ripening: After being pollinated and fertilized, an ovary of a flower gradually grows up into a fruit. This fruit gradually matures and starts ripening. The fruit ripening is a dynamic and active process. In this method the following changes are noticed:

Hydrolysis of stored materials: Carbohydrate present in the edible part of fruits, as the stored form is turned into simpler forms by hydrolysis.

Softening of pectic substances: Ripe fruits are usually, softer than, unripened fruits. During the fruit ripening, the solubility of the pectic substance of the middle lamella of the cells is increased. Pectic substance loses its binding properties due to the activities of pectolytic enzymes. Thus, when ripened, the cells of fruits move away from each other and fruits become soft.

If fruits are stored in houses, the formation chlorophyll will be stopped and the colour will be changed into yellow-orange or red according to the characteristics.

Changes of flavour: Usually unripened fruits do not have any flavor. Special flavor is formed in ripe fruits. Different fruits base different flavors because of their sufficient flavor producing substances. During the fruit ripening, the flavor producing chemical substances are formed in their stored materials due to different biochemical reactions.

Scientists have proved that ethylene is mainly responsible for fruits ripening. A green fruit can be made ripened by applying ethylene before becomes matured.

Types of Plants according to the Length of Day Light