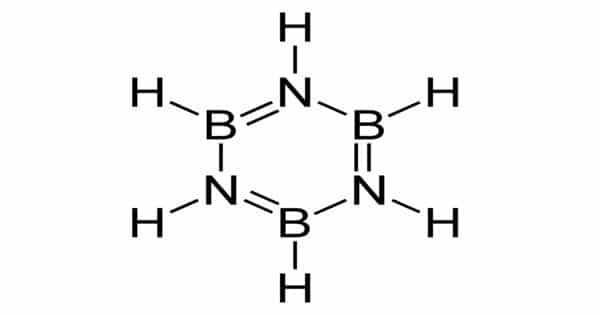 Borazole, or borrazine, is a polar inorganic compound with the chemical formula B3H6N3. It is an inorganic compound made up of boron, nitrogen, and hydrogen. The three BH units and three NH units alternate in this cyclic compound. With benzene, the compound is isoelectronic and isostructural. As a result, borazine is also known as “inorganic benzene.” Borazine, like benzene, is a colorless liquid with an aromatic odor.

Borazine is a colourless liquid with an aromatic smell. In water it decomposes to boric acid, ammonia, and hydrogen. Borazine, with a standard enthalpy change of formation ΔHf of -531 kJ/mol, is thermally very stable.

Borazine can be prepared by heating together boron trichloride and ammonium chloride. The initial product formed is trichloroborazine which on reducing with sodium borohydride yields borazine.

Borazine is a highly polar molecule due to high electronegativity difference between boron and nitrogen atom.

The compound was reported in 1926 by the chemists Alfred Stock and Erich Pohland by a reaction of diborane with ammonia.

In a two-step process to borazine, boron trichloride is first converted to trichloroborazine:

The B-Cl bonds are subsequently converted to B-H bonds:

Borazine is isoelectronic with benzene and has similar connectivity, so it is sometimes referred to as “inorganic benzene”. This comparison is not rigorously valid due to the electronegativity difference between boron and nitrogen. X-ray crystallographic structural determinations show that the bond lengths within the borazine ring are all equivalent at 1.429 Å, a property shared by benzene. However, the borazine ring does not form a perfect hexagon. The bond angle is 117.1° at the boron atoms and 122.9° at the nitrogens, giving the molecule the D3h symmetry point group.

Borazine and its derivatives have the potential to be precursors to boron nitride ceramics. Boron nitride can be made by heating polyborazylene to 1000 degrees Celsius. Borazines are also potential starting materials for other ceramics such as boron carbonitrides:

Borazine can also be used as a precursor to grow boron nitride thin films on surfaces, such as the rhodium nanomesh structure.