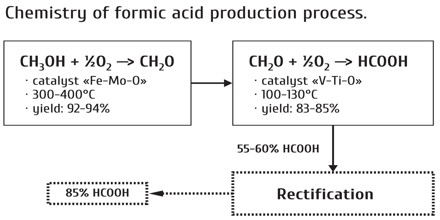 Industrial Production of Methanoic Acid: Methanoic acid used in processing textiles and leather. Formic acid was first isolated from certain ants and was named after the Latin formica, meaning “ant.” It is made by the action of sulfuric acid upon sodium formate, which is produced from carbon monoxide and sodium hydroxide.

By the action of carbon monoxide on NaOH:

Formic acid is prepared industrially by passing CO over powdered NaOH at 2000 C/ 150° C under a pressure of 6 – 10 atm. The sodium format thus produced is treated with cold and dilute H2SO4 the resulting solution on being distilled yields aqueous formic acids as distillate. From Methanol: At 2000 C temperature and 50 atm pressure, methanol vapor react with CO to form methyl format. If methyl is hydrolyzedand distilled, formic acid is produced.