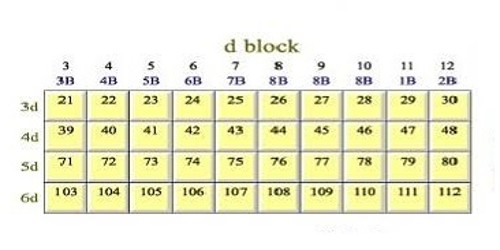 Atomic and ionic radii of elements of all three-transition series. These series are characterized by the completely filled 3d, 4d, and 5d subshells and are named as 3d-(first series) Sc – Zn, 4d series (second series) Y-Cd and the 5d series (third series) La- Hg respectively.

The atomic radii of the first transition series decrease from Sc to Cr and remain almost constant till Cu and then increases towards the end. This can be explained based on two effects namely screening and the nuclear charge effect. These two effects oppose each other resulting in an increase in nuclear charge. Hence very slight variation in the atomic radii from Cr to Cu is observed. For example, in the first transition series, atomic radii, the decrease is more from Sc to Cr (group 3 to 6 ), is almost the same for Mn, Fe, Co, Ni (group 7,8 9 &10) and increase in Cu and Zn. The larger decrease in atomic radii, in column 3 to 6 elements is due to the increase in effective nuclear charge but poor shielding because of the smaller number of d-electrons.

It has been observed that Zirconium and Hafnium have almost equal atomic radii. In elements of column 7 to 10 increasing effective nuclear charges are balanced by the repulsion between the shared d electrons so that radii remain the same. This is because of the lanthanide contraction. This higher nuclear charge leads to the larger shrinkage of radii known as Lanthanide contraction.