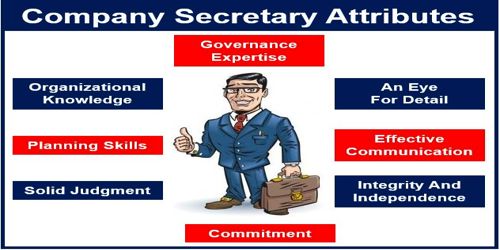 Under the Companies Act, a company secretary is viewed as an officer of the company. He is appointed to perform the duties prescribed in the Companies Act. He also performs other ministerial or administrative duties as assigned to him. He can exercise such power only which is delegated to him. It is his duty and responsibility to supervise that the affairs of the company are conducted in accordance with the provisions of the Companies Act, rule of Securities and Exchange Commission (SEC) and other various acts applicable to the Company.

The company secretary also performs his functions as the advisor to the company. He supplies necessary information to the board of directors and also suggests than in taking decisions. Besides this, he helps the board of directors in performing their activities as he is directly involved with the administrative functions of the company. Also, he advises on time-bound changes to cope with current socio-economic challenges.

A company secretary is also regarded as a coordinator among various parties and departments. He maintains liaison with various departments, employees, and members of the board of directors. He coordinates the activities of various departments and units and keeps liaison with the directors, staff and other stockholders of the company. Moreover, he maintains relationships with other external parties at home and abroad.

Why Feedback is Necessary for Completion of Communication Process?

Qualities of a Good Speaker