Alfred Werner (1866-1919) French born Swiss chemist founded the modern theory on coordination compounds. His theory and pioneering experimental work on metal complexes won for him the Nobel Prize for chemistry in 1913. Werner was the first inorganic chemist to be awarded the nobel prize in chemistry. He is considered at “Father of coordination chemistry”. 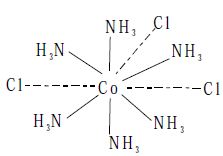 Werner’s theory describes the structures of many coordination compounds successfully. However, it does not explain the magnetic and spectral properties.

Which type of Hybridization occurs in Boron Trichloride (BCl3) Molecule?

How Extraction of Copper from Copper Pyrites?

Describe Formation of Coloured Ions of of D-Block Elements