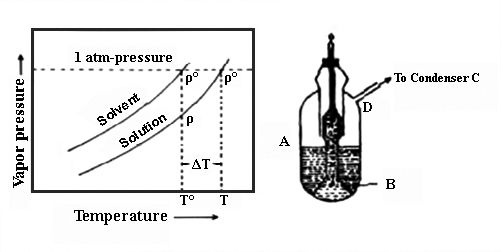 Measurement of elevation of boiling point

In a dilute solution, the elevation of the boiling point is very small which necessitates the use of very sensitive thermometers. The Beckmann thermometer, which is most widely used for the purpose, will be described below. The thermometer essentially consists of n large bulb B at the bottom and a reservoir at mercury R at the top. The thermometer is calibrated from 0 to 6 K and the wale S is subdivided into 0.01 K The amount of mercury in the two reservoirs can be adjusted by careful manipulation depending on whether ebullioscopy or cryoscopy measurements are carried out.

Beckmann’s Method: The Beckmann apparatus generally used for measuring the elevation of temperature it even in the figure. A known volume of a given mass of the solvent is first taken into the boiling tube to fill about two-thirds of its capacity.

By definition, the boiling point is the temperature at which the vapor pressure of the liquid equals the surrounding pressure and liquid turns into vapor. The boiling tube is connected to a condenser on one side, and there is a small side tube, E, for introducing the solute. The boiling tube is generally surrounded by an insulated jacket. The Beckmann thermometer is introduced into the boiling tube through a rubber stopper in such a way that the lower bulb completely immerses into the solvent. The boiling point of a liquid is the temperature at which its vapour pressure is equal to the pressure of its surrounding environment. 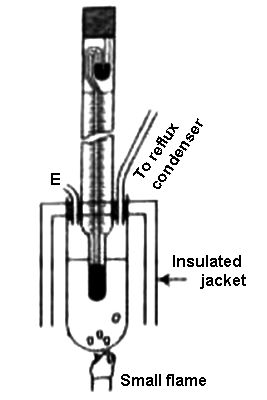 The heating of the boding tube is carried out by a Bunsen burner or by electric means. At first, the thermometer reading corresponding to the boiling of the pure solvent is recorded, and then the experiment is repeated after the addition of a known mass of a solute. The difference in Beckmann’s reading in these two experiments gives a measure of the elevation of the boiling point. Since the mass of the solute, solvent, and K for the solvent are known, the relative molar mass of the solute can easily be determined. When a non-volatile solute is added to a solvent, the vapor pressure of the resulting solution is lower than that of the pure solvent.

Elevation in boiling point: We know that pure water boils at 100 °C at 1 atm pressure but an interesting thing happens to the boiling point if we add a small amount of salt to the water. A solvent’s vapor pressure will lower when a solute is added. This happens because of the displacement of solvent molecules by the solute. It has been experimentally proven that adding any form of non-volatile solute to a liquid increases its boiling point. The lower number of solvent molecules at the surface means that fewer will evaporate, and thus the vapor pressure is lowered. The amount by which the boiling point changes are directly proportional to the amount of solute added. For the vapor pressure to equal the atmospheric pressure, a higher temperature is required, and a higher boiling point is observed.