These are less common than ethanol-gasoline blends but do find application in countries including China where the composition range available is M15 to M80 (15% methanol and 80% methanol respectively, balance gasoline in each case). Vapour pressures of gasoline-methanol blends were studied by Pumphrey et al., whose experimental work spanned the whole composition range from a pure sample of a particular gasoline to pure methanol. 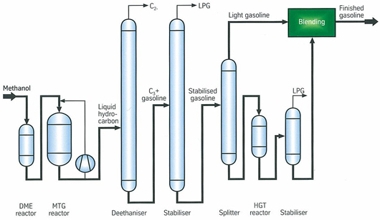