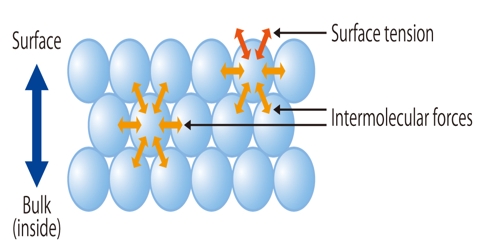 It is a matter of common experience that drops of liquid tend to assume a spherical shape. When a steel needle is placed carefully on the surface of water it floats, although its density is much higher than that of water and the buoyancy effect is practically nil. The cause of this property of the surface of liquids is what is known as surface tension.

The surface tension of liquids arises from the unbalanced forces of molecular attraction on the surface. Consider a molecule in the interior of a liquid. The molecule is being attracted in all directions by the surrounding molecules and, on an average, these attractions cancel each other. A molecule on the surface, on the other hand, experiences a resultant inward pull because there are practically no molecules on the vapour side (density being much less than that of liquid) to counteract this attraction. This is illustrated in Figure 1. As a result of this inward attraction the surface of a liquid tends to adjust itself to give the minimum surface area. Hence a liquid drop assumes a spherical shape Furthermore, the inward attraction on the surface molecules makes the surface act as if it consisted of an elastic membrane. 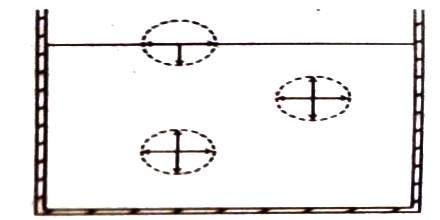 Fig: Attraction on molecules in a liquid.

The surface tension of a liquid may be with reference to Figure 2. A liquid film is formed, like a soap film, in a wire frame, three sides of which are fixed while the fourth is movable. The film may be expanded by applying a force to the movable side. If the force is withdrawn the film contracts the force required to stretch the film is found to be proportional to the length, l, of the movable side. Since there are two surfaces to the films the total length el the film is 2l and one can write, 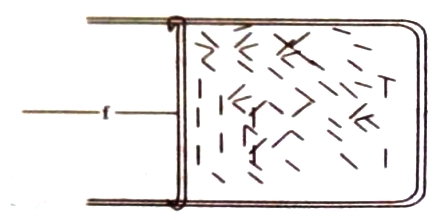 Fig: surface tension of a liquid

The proportionality constant, γ is known as the surface tension. Hence surface written may be defined as-

“The force in dynes; which acts at right angles to a line of 1 cm length on the surface, opposing the expansion of the surface area”.

In order to increase the area of the surface it is necessary to do work to bring the molecules from the interior to the surface against the force of attraction. The liquid surface may, therefore, be thought to possess free energy. Surface free energy may be defined as the work (in ergs) required increasing the area by 1 sq cm. The tendency of a liquid surface to reduce its area may be regarded as another example of a system tending toward a state of minimum free energy.