Phylum Coelenterata are aquatic, mostly marine, sessile or free-swimming, radially symmetrical animals (Figure). The name cnidaria is derived from the cnidoblasts or cnidocytes (which contain the stinging capsules or nematocytes) present on the tentacles and the body. Cnidoblasts are used for anchorage, defense and for the capture of prey. Cnidarians exhibit tissue level of organization and are diploblastic. They have a central gastro-vascular cavity with a single opening, hypostome. Digestion is extracellular and intracellular. Some of the cnidarians, e.g., corals have a skeleton composed of calcium carbonate. Cnidarians exhibit two basic body forms called polyp and medusa (Figure). 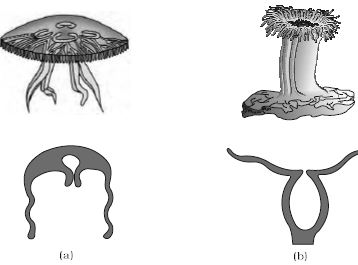 Fig: Examples of Coelenterata indicating outline of their body form: (a) Aurelia (Medusa) (b) Adamsia (Polyp)

The former is a sessile and cylindrical form like Hydra, Adamsia etc. whereas; the latter is umbrella-shaped and free-swimming like Aurelia or jelly fish. Those cnidarians which exist in both forms exhibit alternation of generation (Metagenesis), i.e., polyps produce medusae asexually and medusae form the polyps sexually (e.g., Melia).