The osmotic pressure of a solution at an exacting temperature may be defined as the surplus hydrostatic pressure that builds up when the solution is separated from the solvent by a semi-permeable membrane. It is denoted by p. 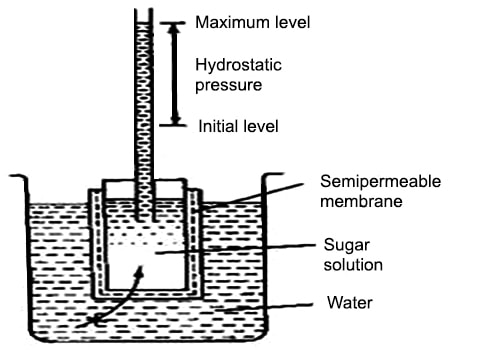 Pfeffer’s method: Pfeffer developed a technique of depositing gelatinous copper ferrocyanide in the pores of an earthenware pot and used this pot to act as a semi-permeable membrane. Osmosis is the diffusion of a fluid through a semi-permeable membrane. His apparatus for the measurement of osmotic pressure is shown in Figure. The porous pot, P, having the deposit of copper ferrocyanide in its pores are connected to a manometer, M is shown. The pot is filled with the experimental solution and then placed in a vessel containing the solvent. The entire assembly is then placed in a thermostat and allowed to stand until equilibrium is reached. At equilibrium, the difference in the heights of mercury columns in the two tubes gave the osmotic pressure. Osmotic pressure is the excess pressure which must be applied to a given solution in order to increase its vapor pressure until it becomes equal to that of the solution. The osmotic pressure of a solution is the pressure difference needed to stop the flow of solvent across a semipermeable membrane. 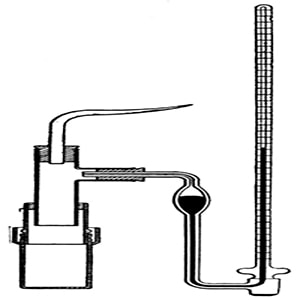 The osmotic pressure of a solution is proportional to the molar concentration of the solute particles in the solution. The method is slow because it might take a couple of days to reach equilibrium. Also, if the pressure is high, the membrane may break and cannot be used. When a semipermeable membrane (animal bladders, skins of fruits and vegetables) separates a solution from a solvent, then only solvent molecules are competent to pass through the membrane. Pfeffer’s method was improved by Berkeley and Hartley.

Measurement of Elevation of Boiling Point