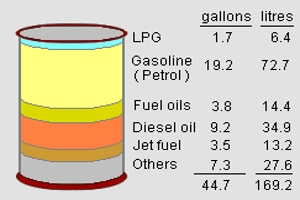 It is clear then that gasoline comes from very varied sources and that provided certain specifications are met the origin will be irrelevant to the final user. It is likely that a motorist driving up the west side of the US will whilst in California, Oregon and Washington buy gasoline made from crude oil, but on crossing the border into western Canada he/she might well purchase gasoline made from tar sands. Quality control of gasoline production in each case will ensure that, so to speak, the car’s engine will totally unaware of differences in origin of fuel it receives.

The ‘gasoline substitutes’ of interest in this chapter are methanol and ethanol.