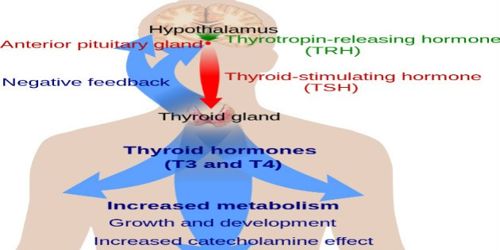 Mechanism of action of thyroid hormone

(A) Binding of TH with its receptor: The TH receptor is either attached to DNA strands or proximally to them. TH first binds with the receptor forming a hormone-receptor complex. Receptors for thyroid hormones are intracellular DNA-binding proteins that function as hormone-responsive transcription factors, very similar conceptually to the receptors for steroid hormones.

(B) Activation of DNA strands: The activated hormone receptor complex then activates a specific portion of DNA strands of the cell nucleus which in turn initiates transcription of genes to form messenger RNA (mRNA). The effect of the hormone-receptor complex binding to DNA is to modulate gene expression, either by stimulating or inhibiting transcription of specific genes.

(C) Translation: mRNA diffuses in the cytoplasm, where it causes the translation process at ribosome to form new ribosome protein. And as new proteins form, the cellular response occurs gradually.

What are Pregnancy Tests?