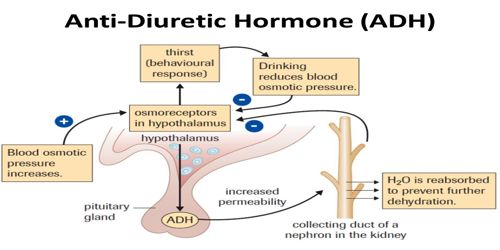 The Antidiuretic hormone (ADH) is a hormone that helps your kidneys manages the amount of water in your body. It tells your kidneys how much water to conserve. The accurate mechanism by which ADH acts on the collecting ducts to enlarge their permeability is only partly known. Without ADH, the luminal membranes of the tubular epithelial cells of the collecting duct are almost impermeable to water. It is one of only two hormones secreted by the posterior pituitary gland in the brain.

Mechanism of action of ADH 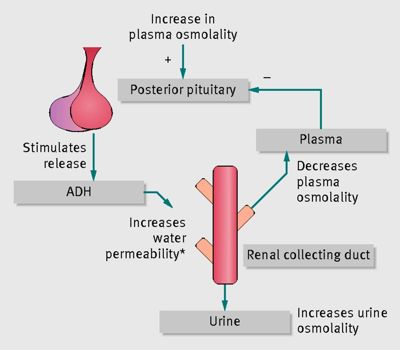 ECF becomes too concentrated → fluid is pulled out by osmosis out of osmoreceptor cells → decrease in its size → initiation of an appropriate signal in anterior hypothalamus → Signal reaches posterior pituitary → secretion of ADH.

ECF becomes too diluted → water moves by osmosis into osmoreceptor cells → cessation of the signal in hypothalamus →↓ secretion ADH.

Aquaporins are protein water channels aquaporin 1, 2 and 3 (esp. Age.2) are found in the endosomes of principal cells of collecting duels of the kidney.

Secretion of ADH: Transportation by blood to kidney → Binding with V2 receptor of the principal of CT and CD → Formation of CAMP several intracellular mechanisms → Rapid translocation of aquaporin from endosome → insertion of aquaporins into the Luminal membrane of collecting duet → Reabsorption of water.

What are Pregnancy Tests?

Mechanism of Action of Thyroid Hormone