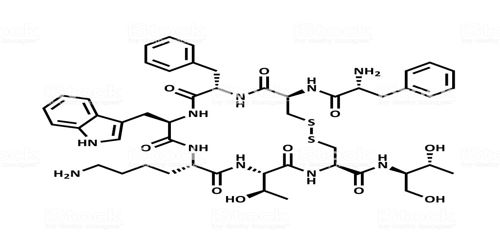 Somatostatin or growth hormone inhibitory hormone is produced in the hypothalamus. It is also produced by the pancreas, GIT, thyroid and other areas of CNS. It is a hormone that inhibits the secretion of quite a few other hormones, including growth hormone, thyroid stimulating hormone, cholecystokinin, and insulin. It consequently was found to be broadly distributed throughout the central nervous system and to transpire in other tissues. 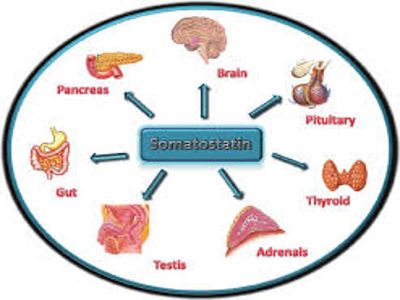 Physiological effect: It acts by both endocrine and paracrine pathways to affect its target cells.

(b) It acts through cell membrane receptor to reduce calcium influx in the cells.

(c) In the pancreas, somatostatin inhibits the secretion of pancreatic hormones, including glucagon and insulin.

(d) It producing neurons and receptors are widely distributed throughout the brain and spinal cord.

(e) It acts as a vital controller of endocrine and nervous system function by inhibiting the secretion of numerous other hormones such as growth hormone, insulin, and gastrin.

Mechanism of Action of Thyroid Hormone