An international study group, including researchers from the Center for Environmental Biotechnology at the Graz University of Technology, has demonstrated how bacteria in rice plant seeds efficiently and environmentally friendly inhibit destructive plant pathogens.

For some time, the research group has been studying the microbiome of rice plant seeds in order to create associations between plant health and the frequency of certain microorganisms. The group has now made a significant breakthrough and discovered a bacterium within the rice seed that can contribute to total resistance to a specific pathogen and is normally spread from one generation of plants to another.

Researchers were able to demonstrate how a specific bacterium inside the seeds of rice plants effectively and in an eco-friendly way inhibits destructive plant pathogens.

Rice is the staple diet of around half of the world’s population. The production of the rice plant is very water-intensive and, according to the German assistance organization Welthungerhilfe, about 15% of rice is cultivated in areas with a high risk of drought. Global warming is thus becoming highly troublesome for rice production, contributing increasingly to small-scale harvests and drought crises. Crop failures triggered by plant pathogens further worsen the problem. Here, organic agriculture is seeking to combat this with pesticides, most of which are used as a precautionary measure in rice cultivation. Resistant plant breeding is the only alternative-and actually only marginally successful-to these environmentally damaging agents. If the plants are immune to one pathogen due to their breeding, they are typically more vulnerable to other pathogens or are less resilient under unfavorable environmental conditions.

Researchers isolated the bacteria from the seeds and established the Sphingomonas melonis bacterium as a functional unit. This bacterium produces organic acid, which paralyzes the pathogen and leaves it harmless. The bacterium is produced in some rice genotypes and is then spontaneously spread from one generation of plants to the next. 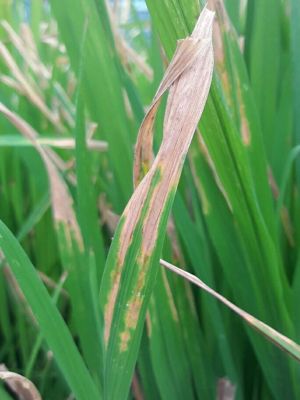 For this cause, the international research community, which includes the Institute of Environmental Biotechnology at the Graz University of Technology, has been researching the microbiome of rice plant seeds for some time in order to create associations between plant health and the frequency of certain microorganisms. The party has now made a big milestone. Within the crop, a bacterium was identified that could contribute to full resistance to a specific pathogen and is normally spread from one plant generation to another.

The microbiome of rice

In traditional rice cultivation in the Chinese province of Zhejiang, it has been observed that one rice genotype (Zhongzao 39 cultivar) often produces resistance to the plant pathogen Burkholderia plantarii. This pathogen contributes to crop failure and also produces biotoxins that can cause organ and tumor damage in persistently exposed humans and animals. “Up to now, the sporadic resistance of rice plants to this pathogen could not be explained,” says Tomislav Cernava of the Institute of Environmental Biotechnology at the Graz University of Technology.

In cooperation with Zhejiang University (Hangzhou) and Nanjing Agricultural University in China, as well as with Japan’s Hokkaido University, Cernava, along with Gabriele Berg, Head of Microbiome Research and Institute, and Peter Kusstatscher, a colleague of his institute, Cernava, investigated the microbiome of rice seeds from various developing regions in depth.

The bacterial composition as a decisive factor

Scientists have observed that the resistant plants have a distinct bacterial structure inside the seeds than the disease-sensitive plants. In specific, the bacterial genus Sphingomonas was present substantially more commonly in resistant seeds. The researchers therefore isolated the bacteria of this genus from the seeds and established the bacterium Sphingomonas melonis as the responsible agent for resistance to disease. This bacterium produces organic acid (anthranilic acid) which inhibits the pathogen and therefore makes it harmless. “This also works when the isolated Sphingomonas melonis is added to non-resisting rice plants. This automatically makes them resistant to the plant pathogen Burkholderia plantarii,” explains Tomislav Cernava.

In addition, the bacterium is produced in some rice genotypes and is then spontaneously spread from one plant generation to the next. “The potential of this finding is enormous. In the future, we will be able to use this strategy to reduce pesticides in agriculture and at the same time achieve good crop yields,” says Cernava.