“At constant temperature, the volume of a confined gas is inversely proportional to the pressure to which it is subjected”. (PV = k)

The law itself can be stated as follows:

“For a fixed amount of an ideal gas kept at a fixed temperature, pressure and volume are inversely proportional”

Boyle’s law or the pressure-volume law states that the volume of a given amount of gas held at constant temperature varies inversely with the applied pressure when the temperature and mass are constant.

V is proportional to the inverse of P, PV = C 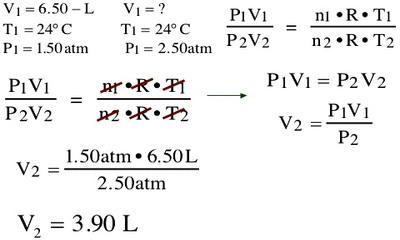