The heart is the most important organ of the circulatory system. It is a sort of pump in the body of the toad. This organ is situated in between the lungs and remains covered by the membrane named pericardium. The wall of the heart is quite thick and three-layered Epicardium, Myocardium, and Endocardium. The outer layer of the heart is epicardium. The middle layer is myocardium which is made of cardiac muscles and quite thick. The inner layer is known as endocardium. 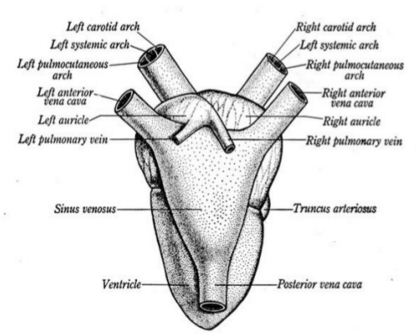 The heart of a toad is divided into three main chambers: Two auricles and one ventricle. Besides, there are two sub chambers named sinus venosus and conus arteriosus.

Auricle: The two upper chambers of the heart are named auricles. The two auricles are divided into right and left parts by a septum. Right auricle is bigger than the left. By a common auriculo ventricular aperture the right and left auricles open into the ventricle.

Ventricle: In the heart of toad, there is one ventricle. The wall of the ventricle is quite thick and towards the inner side, there are some longitudinal projections. These projections do not allow to mix the oxygenated blood and deoxygenated blood.

Conus arteriosus: Placed obliquely from the right end of the ventricle of the heart up to the left auricle the chamber is named conus arteriosus. The two parts of conus arteriosus in front of the auricle named called truncus arteriosus or aorta. From here comes out the three main arteries. There. is a spiral-shaped valve inside the cones called spiral valve. This valve divides the conus cavity into right and left parts.