Heterotrophic bacteria are the most abundant in nature. The majority are important decomposers. Many of them have a significant impact on human affairs. They are helpful in making curd from milk, production of antibiotics, fixing nitrogen in legume roots etc. Some are pathogens causing damage to human beings, crops, farm animals and pets. Cholera, typhoid, tetanus, citrus canker are well-known diseases caused by different bacteria. Bacteria reproduce mainly by fission (Figure). 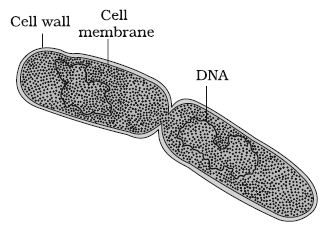 Sometimes, under unfavorable conditions, they produce spores. They also reproduce by a sort of sexual reproduction by adopting a primitive type of DNA transfer from one bacterium to the other.

The Mycoplasmas are organisms that completely lack a cell wall. They are the smalls living cells known and can survive without oxygen. Many mycoplasmas are pathogenic in animals and plants.

Definition and Characteristics of Cyanobacteria