Home Biology The Structure and Habitat of Sargassum 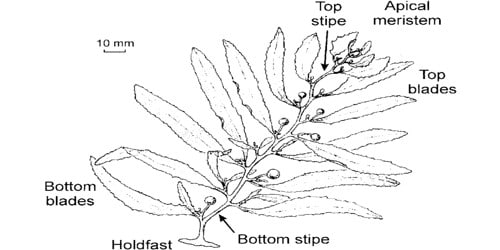 Height: Height of the thallus body may be up to a few meters.

Body Structure: Plant body can be divided into three parts:

1) Holdfast: It is plate-like in structure. With the help of holdfast, the plant keeps its body fixed with any substratum such as stone, etc.

2) Stipe: It is the main basic structure of the plant. Reproduction takes place by vegetative and sexual means. Asexual reproduction is absent.

The primary branch gives rise to secondary branches which are rod-like in structure.

Few secondary branches are modified into air bladders which keep the plant body floating in the water. They are free-floating and brown in color, commonly found in tropical seas, though some are found in the Sargasso Sea

There are also some tertiary branches growing from the base of the air bladders which act as receptacles. It bears long shoots of unlimited growth (primary laterals), leaves (secondary late­rals), air bladders and receptacles. 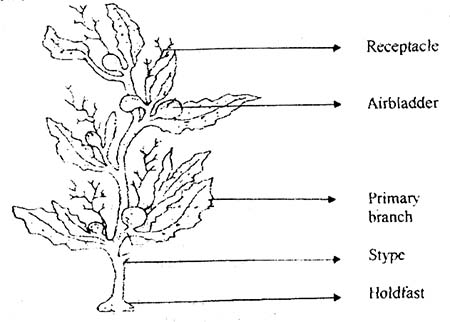 Vegetative reproduction takes place by frag­mentation. Sexual reproduction is oogamous. Oogonium produces one egg and the anthe­ridium produces 64 biflagellate sperms. Fertilization is internal, as the egg is not come out from the oogonium. Zygote germinates directly and produces a new sporophytic (2n) plant. After fusion zygote is formed. The zygote is diploid (2n) and on germination, it develops a sporophytic (2n) plant of Sargassum. Thus it shows a typical example of a diplontic life cycle. Sargassum serves as a primary nursery area for a variety of commercially important fishes such as mahi-mahi, jacks, and amberjacks. 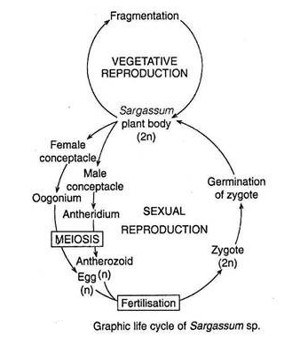 Sargassum shows a diplontic life cycle without any alternation of generations. They grow in a warm sea of temperate regions. The genus is widely distributed; especially in warmer regions mainly in tropical and subtropical seas of the southern hemisphere. This part of the Atlantic ocean is called the Sargasso Sea. Few species of them are found to grow in the coastal area of St Martin Island They are commonly known as Gulf weed.

Floating rafts of Sargassum can stretch for miles across the ocean. This floating habitat provides food, refuge, and breeding grounds for an array of animals such as fishes, sea turtles, marine birds, crabs, shrimp, and more. Some animals, like the sargassum fish (in the frogfish family), live their whole lives only in this habitat.

When Sargassum loses its buoyancy, it sinks to the seafloor, providing energy in the appearance of carbon to fishes and invertebrates in the deep sea, thus serving as a potentially significant accumulation to the deep-sea food web.