Home Biology What is the meaning of ICBN? 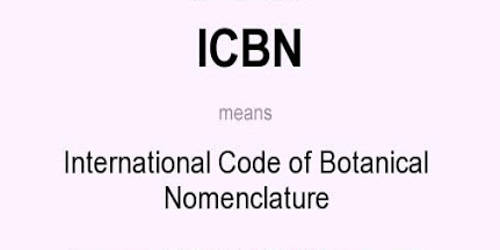 ICBN is the International Code of Botanical Nomenclature or the principles of the naming of different plants that are internationally accepted. It is the set of rules and recommendations dealing with the formal botanical names that are given to plants. Its intent is that each taxonomic group (“taxon”, plural “taxa”) of plants has only one correct name that is accepted worldwide. It is an international code or deed for writing the name of world flora. The process of naming plants based on international rules proposed by botanists to ensure the stable and universal system is called botanical nomenclature. The naming of plants are following according to the rule of ICBN after its establishment.

The principles of scientific name according to ICBN is – There are some principles that guide decisions concerning the International Code of Botanical Nomenclature (ICBN).

Principle 1: Botanical nomenclature is independent of zoological and bacteriological nomenclature. Every plant or animal should have a scientific name that has two parts genus & species.

Principle 2: The application of names of taxonomic groups is determined by means of nomenclatural types. The first part of the scientific name will indicate the generic name and the second part will indicate the species name of a plant or animal.

Principle 4: Each taxonomic group with a particular circumscription, position, and rank can bear only one correct name, the earliest that is in accordance with the Rules, except in specified cases. If the scientific name is handwritten, genus and species must be underlined separately.

Principle 5: Scientific names of taxonomic groups are treated as Latin regardless of their derivation. If it is written in a typed letter it must be italicized. The scientific name must be written in Latin.

The value of a scientific name is that it is an identifier; it is not necessarily of descriptive value, or even accurate. The ICBN only deals and control to the naming of plants but does not do any work on taxonomy. It is an essential process to overcome the problems of common names. The botanists agreed to lay down certain rules and conditions. The head office of ICBN is situated at Attract in the Netherlands. It has three departments namely, principles, rules and provisions for the governance of the code. The ICBN is an agreement between botanists around the world to follow Binomial system of naming.

The aim of ICBN –

Mention the Living and Non-Living Characteristics of Virus

Characteristics of the Kingdom Monera

Discuss the Phylogenetic or Modern Classification