There are thousands of different eubacteria or ‘true bacteria‘. They are characterized by the presence of a rigid cell wall and if motile, a flagellum. The cyanobacteria (also referred to as blue-green algae) have chlorophyll a similar to green plants and are photosynthetic autotrophs (Figure). 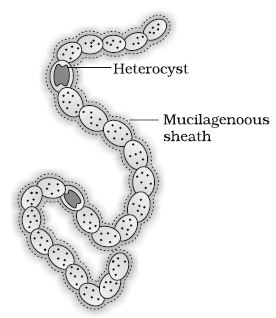 The cyanobacteria are unicellular, colonial or filamentous, marine or terrestrial algae. The colonies are generally surrounded by gelatinous sheath. They often form blooms in polluted water bodies. Some of these organisms can fix atmospheric nitrogen in specialised cells called heterocysts, e.g., Nostocand Anabaena.

Chemosynthetic autotrophic bacteria oxidize various inorganic substances such as nitrates, nitrites and ammonia and use the released energy for their ATP production. They play a great role in recycling nutrients like nitrogen, phosphorous, iron and sulphur.