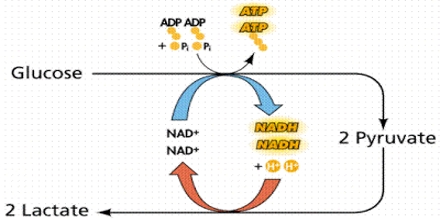 The respiration which occurs in absence oxygen is known as anaerobic respiration. It occurs in some yeasts and bacteria and in muscle when exercise is strenuous and there is not enough oxygen.

Glycolysis: This process is same as the glucolysis of aerobic respiration. In this process one molecule of glucose is broken down into two molecules of pyruvic acid through a series of reactions.

Incomplete oxidation of pyruvic acid: In this process, pyruvic acid is incompletely oxidized to form ethanol and carbon dioxide or lactic acid only.

Formation of ethanol: It occurs in two steps-

In the first step, pyruvic acid is converted to acetaldehyde by the activity of carboxylase enzyme. One molecule of CO2; is also formed in this process.

In the second step, acetaldehyde is converted to ethanol by receiving two hydrogen atoms from NADH + H+ in presence of the enzyme dehydrogenase.

What is Wall Pressure?

Define Photosynthesis with the Equation of this Process with Explanation