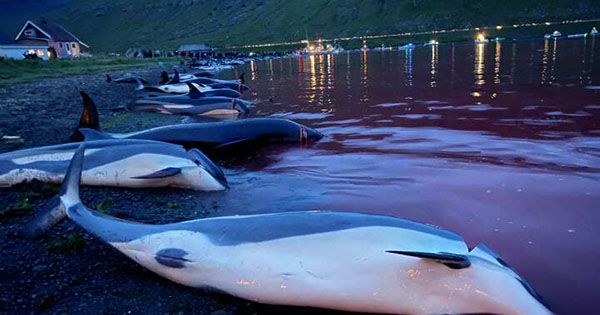 Over the weekend, the Faroe Islands’ shoreline became a gory red after 1,428 dolphins were murdered as part of the annual Grindadráp hunt. Conservationists, animal lovers, and even some Faroese people were outraged by the horrible scenes, which were extensively posted on social media.

On Sunday, September 12, hundreds of Atlantic white-sided dolphins were forced from open waters into shallow water at Skálabotnur beach in Skálafjrur by speed boats and jet skis, according to Sea Shepherd, a marine conservation organization. Their spinal cords were sliced using conventional knives once they were carried into the shallow bay.

According to the NGO, the murder on Sunday was the largest single drive hunt of dolphins or pilot whales in the Faroe Islands’ documented history, and probably the largest single hunt of cetaceans ever recorded globally. The Faroe Islands are a self-governing Danish archipelago of volcanic islands located in the North Atlantic Ocean between Iceland and Norway. Locals participate in the Grindadráp, a traditional sort of dolphin drive hunting, every year if the weather permits. Although some say it dates back to when the Norsemen first came on the islands 1,200 years ago, the violent whaling incident has been chronicled as far back as the 16th century.

Although several species of the cetacean present in the North Atlantic have been slain over the years, long-finned pilot whales are frequently targeted during the hunts. A big pod of Atlantic white-sided dolphins was the goal of the hunt on Sunday.

The cetaceans are driven by boats from the North Atlantic Ocean to the Faroe Islands’ coast. The cetaceans are eventually pushed to a beach or fjord, where they beach themselves. The sea animals are dragged onto shore using hooks and ropes before being slaughtered with a mnustingari, a Faroese knife used to cut their spine. The body is butchered, and the flesh is distributed to the community for consumption.

The meat can be sold to supermarkets and local restaurants if there is a surplus. For some Faroese people, the event is significant, and it is justified in the name of tradition and a community’s right to practice their culture’s traditions, however, attitudes in the Faroe Islands are changing. According to the Danish newspaper Ekstra Bladet, two out of every three Faroese oppose the large dolphin massacre.

Grindadráp has become increasingly regulated in recent years, with licenses and laws governing how whales are dragged ashore and slaughtered, among other things. However, according to Sea Shepherd, this year’s hunters appear to have disobeyed a number of rules, including foremen allowing the hunt without authorized permission and persons hunting without the required license. Heri Petersen, the foreman of one of the local groups responsible for the Grindadráp on Sunday, personally criticized the hunt this weekend, calling it “horrifying” and claiming that he was not fully informed about it.

Reddit’s GameStop Investors Have Donated Over $350,000 To Gorilla Conservation