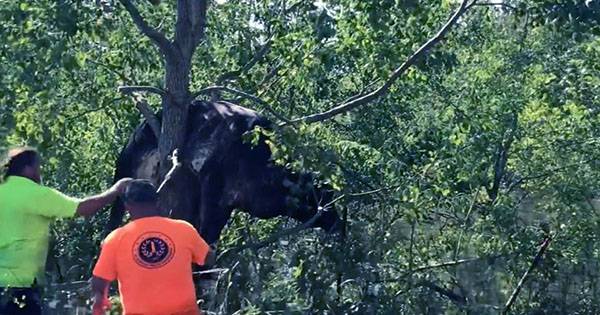 In the eyes of most creatures who encounter hurricanes, to suggest they aren’t much fun is an understatement. Humans flee, sharks dive, yet cows find it difficult to flee. During Hurricane Ida, one unlucky bovine was swept into the air and dumped on a tree in an unceremonious manner. The cow was unable to free itself from its tree trap in Louisiana because it was caught in the branches, but luckily, rescue personnel rushed to its rescue and cut the animal-free. Hurricane Ida wreaked havoc on Louisiana, and after the storm passed, residents got to work surveying storm damage.

Louis Pomes, the Road Yard Chief of Operations, and his colleagues noticed the cow entangled in a tree near Florissant and immediately went to work trying to free it. Hurricane Ida was one of the most violent storms ever to impact the United States, with winds reaching 230 kilometers per hour (150 miles per hour). Power outages, property damage, and even a backward flow of the Mississippi River were all part of the havoc left in its wake. On the 16th anniversary of Hurricane Katrina, which killed over 1,800 people in late August 2005, the tropical storm made landfall.

Owners were requested to enter information about their cats’ sex, breed, coat color, date of birth, and main activity, among other things. The final sample contained a total of 4,316 cats.

The cow was picked up and wrapped in the tree branches by floodwaters, not the winds, according to the Independent. The rising floodwaters can still be seen in the footage as the rescue personnel wade around the tree attempting to figure out how to get the cow out. The cow was eventually successfully liberated, according to a CNN story.

The cow is far from alone among animals who have found themselves in unexpected situations as a result of a storm, and it is arguably far lucky than others. Cyclone Debbie surprised Queensland residents in 2017 when she dumped a 1.5-meter-long (5-foot-long) bull shark in the middle of the road. The shark was discovered in the town of Ayr and is believed to have been washed away by floodwaters before coming to a halt in the middle of the street.

Floodwaters threatened to free the zoo’s resident crocodiles from their enclosure at a zoo in New South Wales. Staff at the Australian Wildlife Park had to get inventive using brooms to keep the animals away from fences, while others dashed wet koalas and other zoo residents to dry locations. Keepers in Thailand, on the other hand, were less successful, as ten crocodiles escaped after a flood in 2017.