We observed cells in an onion peel and/or human cheek cells under the microscope. The onion cell which is a typical plant cell has a distinct cell wall as its outer boundary and just within it is the cell membrane. The cells of the human cheek have an outer membrane as the delimiting structure of the cell. 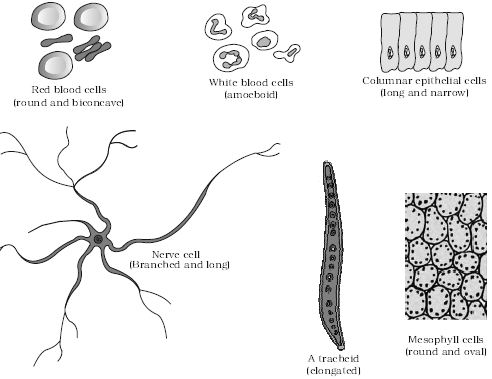 In both prokaryotic and eukaryotic cells, a semi-fluid matrix called cytoplasm occupies the volume of the cell. The cytoplasm is the main arena of cellular activities in both the plant and animal cells. Various chemical reactions occur in it to keep the cell in the ‘living state’. Besides the nucleus, the eukaryotic cells have other membrane-bound distinct structures called organdies like the endoplasmic reticulum (ER), the Golgi complex, lysosomes, mitochondria, microbodies and vacuoles. The prokaryotic cells lack such membrane-bound organelles. Ribosomes are non-membrane-bound organelles found in all cells -both eukaryotic as well as prokaryotic. Within the cell, ribosomes are found not only in the cytoplasm but also within the two organelles – chloroplasts (in plants) and mitochondria and on rough ER. Animal cells contain another non-membrane-bound organelle called centriole which helps in cell division. Cells differ greatly in size, shape and activities (Figure).

For example Mycoplasmas, the smallest cells, are only 0.3 pm in length while bacteria could be 3 to 5 μm. The largest isolated single cell is the egg of an ostrich. Among multicellular organisms, human red blood cells are about 7.0 μm in diameter. Nerve cells are some of the longest cells. Cells also vary greatly in their shape. They may be disc-like, polygonal, columnar, cuboid, thread-like or even irregular. The shape of the cell may vary with the function they perform.

Explain Lysosome with Structure and Function