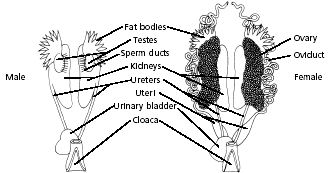 The male toad and the female toad can be distinguished even by their external morphological characters. The organs concerned with the production of gametes [sperms and ova (egg)] are called principal reproductive organs. The organs concerned with the transport of gametes further from the gonads are called accessory reproductive organs.