There are definite steps for classification of plant kingdom. These steps are called Taxa and are singular Taxon. In biological classification, taxonomic rank is the relative level of a group of organisms (a taxon) in a taxonomic hierarchy. Examples of taxonomic ranks are species, genus, family, order, class, phylum, kingdom, domain, etc. 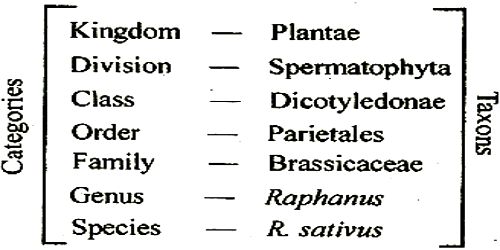 There are about 250000 fruit producing plants. There are many terms for naming genetically controlled variants within a species, but these names generally are not considered to be taxa. In a polymorphic species the terms morph and diversity are frequently applied. Sometime only one member of a Taxon might constitute a higher Taxon. In case of requirement any unit may be spitted to sub-unit for which the term sub should be prefixed alongside the main unit (Taxa), e.g. Sub Order, Sub- Family Sub-Genus, Sub-species etc.