A crow was very thirsty and wanted to drink. He flew from one place to another in search of water. At last he found a jar in a garden. There was some water in the jar. But it was at the bottom and out of his reach. The crow tried to turn the jar over and over again. But it had no effect. As he was leaving the jar in despair, he noticed a heap of pebbles nearby. Then he hit upon a plan. He took some pebbles. Then he dropped the pebbles into the jar. As each pebble went down, the water in the jar rose up little by little. When the water came to the mouth of the jar the crow drank his fill. Then he flew away.

Moral: Think and work hard, you may find solution to any problem. 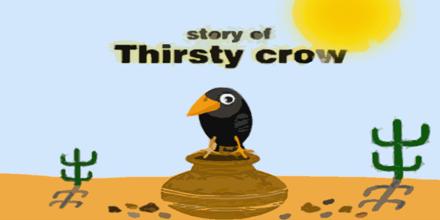