Alexander Fleming was born in 1881 in Scotland. Fleming was the seventh among the eight children of his parents. His parents were farmers. They lived in countryside. Fleming helped in sheep rearing even when he was not old enough to go to school. When he was five years old he started going to the neighborhood school. This school had only about fifteen students and one teacher. Everything in this school was quite informal. Classes were usually held by the bank of the nearby river. When Fleming was ten, he moved to a bigger school at Darvel. It was four miles away from his first school. He had to walk four miles every day. It was quite tiring. But Fleming, the future scientist, lived every minute of his daily walk. 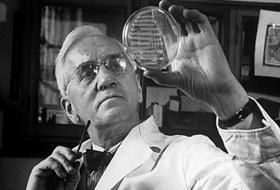