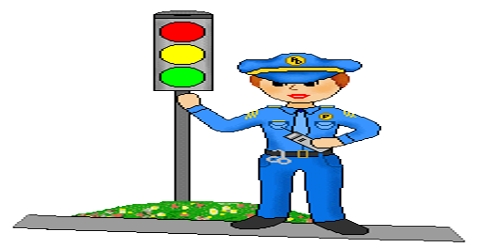 A traffic police is quite familiar to all in the towns and cities. He is part and parcel of the towns and cities, so to speak. We see him standing on the islands from morning to dead night. He puts on a uniform, blue shirt with white sleeves and a white helmet. He uses umbrella to protect himself from the scorching heat of the bunting sun and from heavy rains. He is engaged in controlling the movement of people and vehicles on the road. He also tries to minimize accidents and jams so that people can move easily and freely. There are traffic signals on important roads, bends and junctions. Those who violate traffic rules are taken to the custody. He can take necessary steps if any one violet the rules of traffic. Vehicles and passers-by are bound to follow his directions.

So he is an important person to maintain the law and discipline on the roads and highways, though his service is very important he is an ill-paid servant. Sometimes he searches the drivers whether they have their licenses. Sometimes he helps pedestrians, women and children and old people cross the road. The duties and responsibilities of a traffic police are very heavy. He is very sincere, dutiful and punctual. He renders great service to the town folks. Nevertheless he is ill paid.