Home Other Patriotism is a Noble Virtue 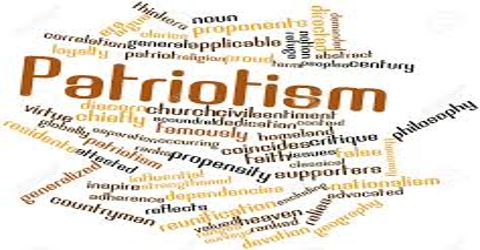 Patriotism is a noble virtue. A patriot loves his own country genuinely and sacrifices everything for the country. A patriot is honored and praised by his country man. But an unpatriotic man is hated by all. He dies a double death.

Patriotism inspires a man to do everything just and fair for the well-being and betterment of the country. It is the quality that impels a man to sacrifice his own interest, comfort, pleasure and even his life for the sake of his country. Patriotic zeal makes a man dutiful, energetic and enthusiastic. He obeys the laws, pays taxes and thinks for the country. Patriotism teaches a man fellow feeling, fraternity and love and sympathy for the countrymen. A patriot is also praised and honored by his countrymen. An unpatriotic man, on the other hand, is an ignoble person. He is self-centered. He engages all his time in achieving his mean end. He causes harm to the country by his unyielding and reckless activities. He is an enemy to the liberty and sovereignty of the country. He feels no scruples to plot against the country. He gets his return in the same way. He may have high titles, immense wealth, high social prestige and noble birth. But despite his worldly achievements, he remains a worthless person. His power and pelf fail to bring him any glory. Because, during his life time such a man is never honored by anybody, rather, he is despised because of his perfidy. No minstrel ever sings for him. Such a man dies a double death. During his life time, he possesses a dead soul and he remains completely forgotten by the people. This is his first death. Then comes his natural demise. After expiring, his body maimed with the vile dins tram which it sprang. Nobody remembers him or shows any honor to him. Nobody sheds tears for him. He sinks into oblivion.