Home Literature The Devil Will Not Do Good to Anybody 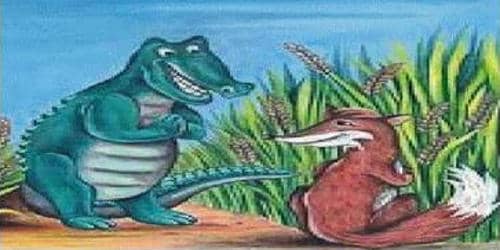 The Devil Will Not Do Good to Anybody

Once a crocodile wanted her eight children to be educated. So she went to a fox and asked him if he could teach her children. The crocodile had good faith in the fox. The cunning fox gladly received the offer. So the crocodile left all her children with the fox and went back to the river.

The fox liked to eat crocodile’s kids. So, he ate one of them and kept the remaining seven. After a week the crocodile came to the fox to see her kids and to enquire about their education. Ile showed the kids to the crocodile one after another and not all at once. He showed one kid thrice making a total of seven. The crocodile became satisfied and went away.

The next week the crocodile again came to see her kids. Meanwhile, the fox had eaten another kid. Following the same trick, the crocodile should the two kids one after another by way of producing each kid twice. Being satisfied, the crocodile went away. She came again the next week. In the meantime, the fox had eaten another kid. Now only one kid was left. The fox told the crocodile some very sweet words about her kids’ progress in education. He also told her that their education would be complete by the following week and she would be in a position to take them back. Now the fox produced the kid eight times. The crocodile came back with a happy mind.

Then the fox ate the remaining kid and went away to another jungle. After a week, the crocodile came with a joyful mood to take back her educated kids. Alas! The fox did not turn up. At last, the crocodile realized that the fox had eaten up her kids and left the jungle. She came back in grief. Her bitter sorrow knew no bounds.

One cannot Live by Pretension

A Short Note on Othello