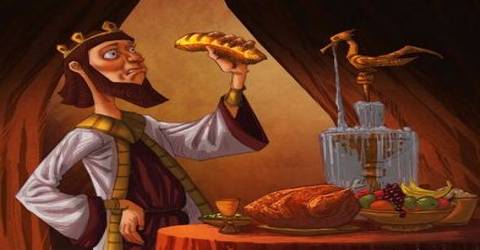 Once upon a time there was a king called Midas. He was extremely fond of gold. Although he had a lot of it, he wanted more. He thought if he had the golden touch, he would be the happiest man in the world. Then and there the wish god granted his wish. One day while he was sitting in the garden, an apple fell from the tree, lie touched it and instantly the apple turned-into gold. He became so glad and went to the palace. He embraced his daughter in joy but instant the girl turned into gold. Whatever he touched turned into gold. The King hated his golden touch so much that he sprinkled even the chairs and the tables and everything else that the fairy’s gift had turned to gold.

Then he again prayed to the wish god to take away the golden touch. Kind wish god granted the king’s prayer and lifted from him the golden touch. King Midas took the princess again into his lap. She became normal. Then Midas gave up his greed. He realize always think very deeply before making choices, each choice you make has its own consequence so, make wise choices.

The moral in this story is that you should not be greedy and appreciate what you already have, no matter how large or small.

Slow and Steady Wins the Race