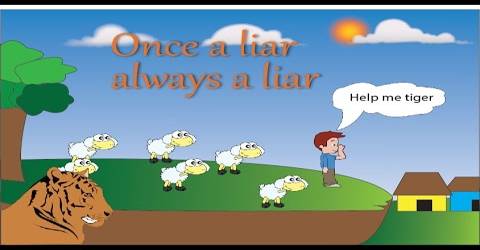 Nobody believes a liar

Once there was a cowboy. He kept a flock of cows near a forest. He used to tell lies and often befooled others by telling lies. One day he wanted to make a fun with the villagers. So he began to cry uttering ‘Tiger’ ‘Tiger’ just to make fun. The farmers working in the-held came to save him. When they came, the cowboy laughed. The villagers felt peeved and came back with an air of anger. They decided not to be fooled by him anymore. The farmers went back to their work.

In this way, he almost every day made fun and befooled the people working around him. Unfortunately, one day, the tiger really came there. Now the boy shouted and cried ‘Tiger’, ‘Tiger’; as loud as he could”. But nobody came to help him out. The farmers heard his cry but nobody came to rescue him. They thought that the boy was just making fun. However, the tiger killed the cowboy. The tiger attacked the boy. The boy struggled hard to save himself but within few minutes, the beast killed him.

So moral of the story, once a liar, always a liar.

Slow and Steady Wins the Race