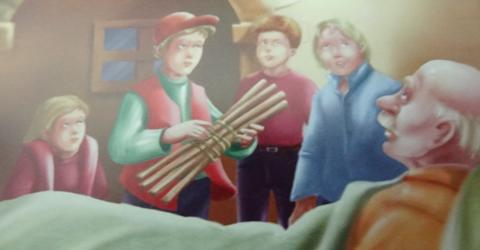 There was art old farmer in a village. He had everything as he was a rich man. But he was not happy. He was unhappy because of his sons. The man had three sons. The sons were not on good relationship among themselves. They used to quarrel with one another. The old man was always worried about this. He thought that after his death the sons would continue their quarrel and bring about their ruin. As a father he was not ready to expect such a kind of thing to happen in their son’s life. So, he wanted to warn them about the bad effect of quarreling among themselves during his life time. He invited all of his sons one day. He asked them to bring five sticks. When they had brought the sticks he tied them together and made a bundle. Then he gave the bundle of sticks to each of them separately and asked them to break it. Everyone tried to break the bundle but could not. Then the old man untied the bundle and gave a single stick to each one of them to break it. This time they broke the single piece of stick quite easily. Finally, the father asked them what lesson they had got from that example. The old man replied, “Dear sons, See! You could easily break the single sticks into pieces, but you were not able to break the bundle! So, if you stay united, nobody can do any harm to you. If you quarrel every time with your brothers, anyone can easily defeat you. I request you to stay united.”

The three sons understood the power of unity and promised their father that whatever be the situation, they would all stay together. The sons replied that remained divided and quarreled with one another they would be weaker and enemies could easily win over them. Since then, the sons stopped quarrelling and started working together and living in unity and amity.

Moral Story: Nobody Believes a Liar

What is Play to one is Death to Other

Failures are the Pillars of Success

Elderly Persons of our Society