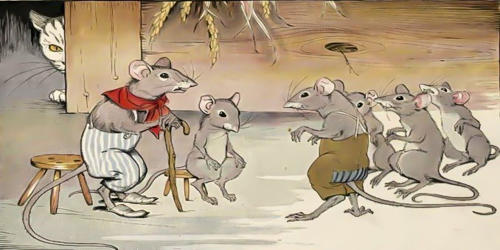 Once some mice were passing a good time in a barn. Being fed up with the loss of cereals, the owner brought a cat. Reluctantly, the mice could not come out of their holes. One day all the rats called a meeting in absence of the cat. What a queer meeting that was down in the caller!

There were big mice, little mice, old mice, young mice, gray mice, brown mice, all very sober and thoughtful. Many suggested many things to kill the cat. Some suggested killing the cat by poisoning. A wise cat suggested cutting its paw and tails. But they could not decide how to kill the cat. At last, an old mouse spoke tip and said, “Shall we have Mr. Graypate for our chairman?” All those who wish Mr. Graypate to be chairman will please hold up their right hands.” Every mouse raised tiny paw. Mr. Graypate walked out to the front and took charge of the meeting. It was we that they chose him, for he was the wisest mouse in the whole country. Gazing over the crowd, he said, “Will Mr. Longtail tell us why we have met here?”

Mr. Longtail walked slowly to the front. Then he stood up on his hind legs and said, “My friends, I think you all know why we are here. Last night Mrs. Whitenose, whom we all love, and all her family were killed by the big white cat. The night before, while Mrs. Blackfoot was out hunting, all her cunning little babies were killed by the same cat. Early this week one of my finest boys was killed. You or I may be next.” “Must we bear this and do nothing at all to save our loved ones and ourselves? We have met here to make some plans for our defense.” Having spoken, Mr. Longtail walked back to the crowd. Mr. Graypate arose and said, You have heard why we are here. Anyone who has a good plan for ridding us of the cat will please tell of it. The meeting is open to all.”

“Let us all run at him suddenly when he is not looking for us, and each gives him a bite. That would surely kill him,” said one brave mouse. “But how many of us do you think he would kill?” said another mouse. “I will not risk my life nor that of my family.” “Nor I “nor I”, nor I’ said many other mice. “Let us steal his food and starve him to death,” suggested another. “That will only make him hungrier for mice,” they replied. “That will never do.” “I wish we might drown him,” said another. “But I don’t know how we could get him into water.” At last, a little gray mouse with a squeaky voice went up to the front and said.”‘ have a plan that will surely work. If we could know when the cat is coming, we could get out of his way. He steals in upon us so quietly that we cannot escape. Let us find a little bell and a string. Let us put the bell on the string and tie the string around the eats’ neck. As soon as we hear the bell, we will ask our leader to say which mouse shall put the bell on the cat’s neck”.

At this, there was a great outcry. One said, “I am so little that I cannot reach high enough to bell the cat.” Another said, “I have been very sick and am too weak to lift the bell.” And so the excuses came pouring in. At last Mr. Grayplate called to the crowd, “silence! I shall choose no one. Who will offer to bell the cat?” It was very quiet at the meeting. One after another of the younger mice went out. None but the older ones were left. At last, they too went sadly home. No one would bell the cat.

MORAL: Empty solutions are of no worth. It is one thing to say that something should be done, but quite a different matter to do it

A Friend in Need is a Friend Indeed