The stem may not always be typically like what they are expected to be. They are modified to perform different functions (Figure). Underground stems of potato, ginger, turmeric, zaminkand, Colocasia modified to store food in them. They also act as organs of perenation to tide over conditions unfavorable for growth. Stem tendrils which develop from axillary buds, are slender and spirally coiled and help plants to climb such as in gourds (cucumber, pumpkins, watermelon) and grapevines.

Axillary buds of stems may also get modified into woody, straight and pointed thorns. Thorns are found in many plants such as Citrus, Bougainvillea They protect plants from browsing animals. Some plants of arid regions modify their stems into flattened (Opuntia), or fleshy cylindrical (Euphorbia) structures. 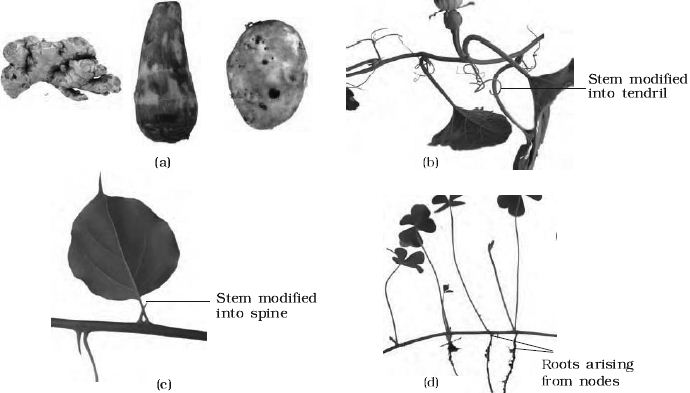 Figure: Modifications of stem for: (a) storage (b) support (c) protection (d) spread and vegetative propagation

They contain chlorophyll and carry out photosynthesis. Underground stems of some plants such as grass and strawberry, etc., spread to new niches and when older parts die new plants are formed. In plants like mint and Jasmine, a slender lateral branch arises from the base of the main axis and after growing aerially for some time arch downwards to touch the ground.

A lateral branch with short internodes and each node bearing a rosette of leaves and a tuft of roots are found in aquatic plants like Pistia and Eichhomia. In banana, pineapple and Chrysanthemum, the lateral branches originate from the basal and underground portion of the main stem, grow horizontally beneath the soil and then come out obliquely upward giving rise to leafy shoots.