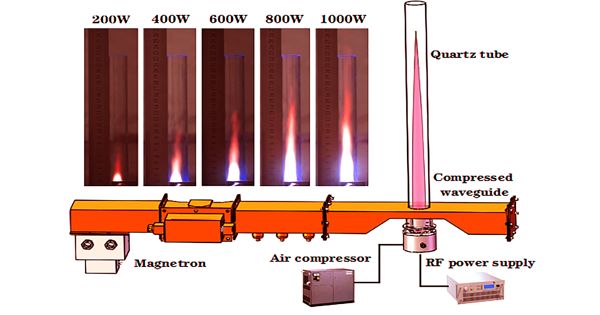 Humans rely on fossil fuels as their primary source of energy, particularly in transport. Fossil fuels, however, are both unsustainable and unhealthy, acting as the largest cause of greenhouse gas pollution and contributing to harmful respiratory consequences and global warming destruction.

A team of researchers at the Institute of Technology at Wuhan University have demonstrated the prototype design of a propulsion thruster that uses air plasma produced by microwave ionization. Such a jet engine essentially uses only air and energy to generate high temperature and pressurized jet propulsion plasma. The engine is defined in the AIP Advances journal published by AIP Publishing.

A prototype jet engine can propel itself without using any fossil fuels, potentially paving the way for carbon-neutral air travel. That means planes may someday fly using just electricity and the air around them as fuel.

Engineers in China have created a prototype fossil-fuel-free jet propulsion design that uses microwave air plasmas. If physicists would find a way to turn their concept into a working engine, the invention could significantly reduce the carbon footprint of the transport industry.

Plasma propellers are widely popular for their role in spacecraft as a form of solar-electric propulsion that utilizes xenon plasma. However, xenon plasma is worthless in the Earth’s atmosphere because accelerating xenon ions are losing their force to pressure against the air. Instead, the prototype plasma jet thruster produces high-pressure, high-temperature plasma using only the injection of electricity and air.

“The motivation of our work is to help solve the global warming problems owing to humans’ use of fossil fuel combustion engines to power machineries, such as cars and airplanes,” said author Jau Tang, a professor at Wuhan University. “There is no need for fossil fuel with our design, and therefore, there is no carbon emission to cause greenhouse effects and global warming.”

Beyond solid, liquid, and gas, plasma is the fourth state of matter, composed of a mass of charged ions. It naturally appears in areas like the surface of the sun and the lightning of the earth, but it can also be produced. The researchers developed a plasma jet by compressing air into high pressures and using a microwave to ionize the pressurized air stream.

This approach varies from previous efforts to build single-key plasma jet thrusters. Other plasma jet thrusters, such as the Dawn space probe of NASA, use xenon plasma that cannot overcome friction in Earth’s atmosphere and are thus not efficient enough for use in air travel. Instead, the writers’ plasma jet thruster produces high-temperature, high-pressure plasma in situ using only the infusion of air and electricity.

A prototype plasma jet system can lift a 1-kilogram steel ball over a 24-millimeter-diameter quartz conduit, where high-pressure air is transformed into a plasma jet by going through a microwave ionization chamber. On a scale, the resulting thrust pressure is equivalent to that of a commercial aircraft jet engine.

The team of engineers is currently working to increase the performance of the technology. Going forward, researchers are preparing to develop and test real-life thrusters with high-powered microwave sources. In the end, technology could be extended to a full-size plane.

The architecture of the prototype can be scaled up to a full-size jet by installing a large number of these high-power microwave propellers. The authors are working to improve the reliability of the system against this goal. “Our results demonstrated that such a jet engine based on microwave air plasma can be a potentially viable alternative to the conventional fossil fuel jet engine,” Tang said.