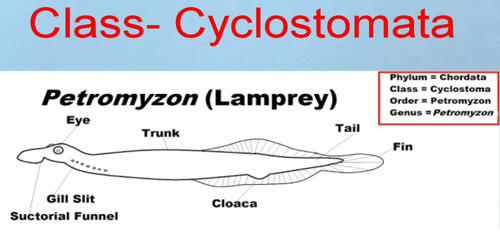 Cyclostomes are distinguished chiefly by the absence of certain customary fishlike structures. It is a group of agnathans that comprises the living jawless fishes: the lampreys and hagfishes. They are not only jawless, but are also without paired fins, scales, swim bladder, cloaca, oviducts, true mesodermal teeth, vertebral centra, ribs, or bones of any kind. Both groups have jawless mouths with horny epidermal structures that function like teeth, and branchial arches that are internally positioned instead of external as in jawed fishes. They have only one external nasal opening instead of the pair present in most vertebrates. They breathe by means of internal gills. All are eel-like in shape but are not to be confused with true eels, which have a bony skeleton including jaws, instead of a skeleton consisting principally of a persistent notochord.

All living members of the class Cyclostomata are ectoparasites on some fishes. They have an elongated body bearing 6-15 pairs of gill slits for respiration. Cyclostomes have a sucking and circular mouth without jaws (Figure).

Their body is devoid of scales and paired fins. The cranium and vertebral column are cartilaginous. Circulation is of closed type. Cyclostomes are marine but migrate for spawning to freshwater. After spawning, within a few days, they die. Their larvae, after metamorphosis, return to the ocean. They are parasitic, usually feeding on fish in their adult stage. They are known to be the only living vertebrates without true jaws, hence called Agnatha. Cyclostomata includes hagfishes and lampreys.

Transportation of Oxygen of Toad