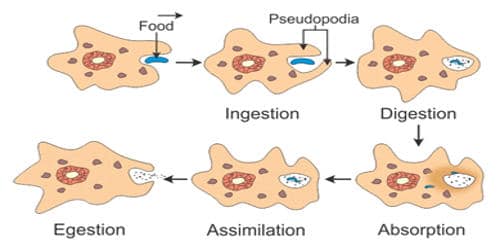 Amoeba is a simple, unicellular organism that is found at the bottom of freshwater. The cytoplasm of the body cannot absorb directly the food materials which Amoeba intakes. It contains jelly-like cytoplasm with a clear nucleus, many food vacuoles, and contractile vacuoles. Reacting with various enzymes these food materials are converted into simple components for assimilation. This is the digestion process. Digestion occurs in two process-acidic and alkaline. Amoeba has no digestive system. Food is digested inside the food vacuoles. Along with the body movements the food vacuoles are brought well inside the endoplasm. Inside. the endoplasm, hydrochloric acid from the inner membrane of the vacuoles works on the food. It kills the living food materials and makes the contents acidic. The digestion in amoeba is intracellular. It means digestion takes place within the cell.

Digestion in amoeba is intracellular taking place within the cell. The vacuoles are transported deeper into the cells by cytoplasmic movements. Here they fuse with lysosomes that contain enzymes. Thus, the amoeba can digest sugars, cellulose, and proteins. Fats, however, remain undigested. Thus the acidic process is finished. Next alkali is secreted from the neighboring cytoplasm which brings the partly digested food material into the alkali media. At this time, various types of enzymes are secreted from the endoplasm enters the food vacuole along with the food. In the digestion of food, more than one enzyme participates. It is however not known definitely which enzymes take part and what their order is. It is assumed that there is a possibility of the presence of protease, lipase, and carbohydrates enzymes. The enzyme named protease is secreted when food remains in an acidic medium inside the food vacuole. It converts the complex protein food into simple peptides. 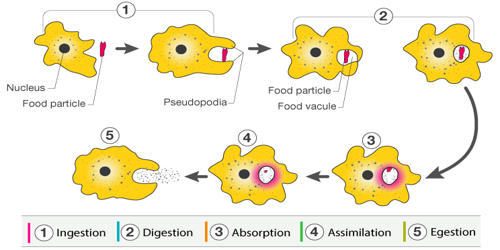 When the food vacuole becomes alkaline, the enzyme peptidase becomes active. Due to this reaction peptide is transformed into amino acids. Lipase transforms the fat portion of the food into fatty acid and glycerol. The enzyme amylase acts on the carbohydrate part of the food and transforms lit into glucose. As the digestion process continues, the form of the food material is gradually changed.

It is the process of absorption of the digested food material into the cytoplasm leaving behind the undigested food material. Since the food on digestion is converted into liquid diffusible form, it is readily absorbed by the cytoplasm. Sometimes the amoeba absorbs large quantities of food. The excess food gets stored in the form of glycogen as well as lipids. The vacuole becomes progressively smaller as the food is absorbed by diffusion.

This is the “utilization” process. All the parts of the cell get the nutrients by the cyclic movement of the cytoplasm called the cyclosis. During this process, the absorbed food is utilized for energy production, growth, and repair as well as for multiplication. In this manner, the food is assimilated.

Differences between Toad and Frog