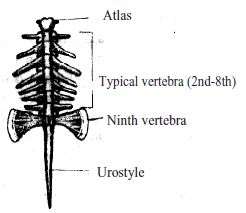 Fig: the Vertebral column of Toad

Atlas: The first vertebra of the vertebral column is called the atlas. It is connected with the skull in front and the second vertebra (at the posterior). The Atlas looks like a ring. It has no transverse process, neural spine and prezygapophysis. Its neural canal is comparatively bigger in size. Atlas meets the next vertebra with the help of post zygapophysis. 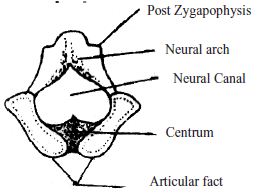