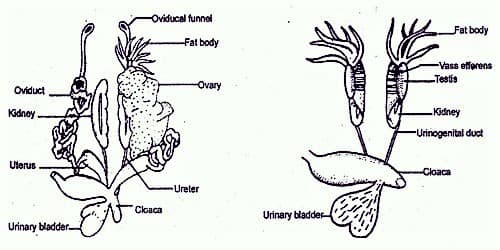 A mature female can lay 2500 to 3000 ova at a time. Gametes come out through the cloacal aperture. Ovaries shed the mature eggs in the coelomic cavity. Eggs enter oviducal funnel to reach oviduct. Eggs enter cloaca through oviducts of both sides. External fertilization is seen in frogs and occurs in water.

Fertilization is external and takes place in water. Development involves a larval stage called tadpole. Tadpole undergoes metamorphosis to form the adult. Frogs are beneficial for mankind because they eat insects and protect the crop. Frogs maintain ecological balance because these serve as an important link of the food chain and food web in the ecosystem. 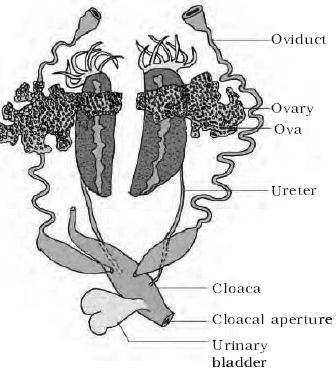 Eggs are produced from the germinal epithelium. Frog’s larvae are aquatic, gill breathing. Metamorphosis takes place in tadpoles when the frog becomes lung breathing and terrestrial.

They become grown-up after passing through the following stages,

It consists of following parts

Oviduct: It is an extended curved duct with the substantial wall that is not associated with kidneys. It is divided into three parts.