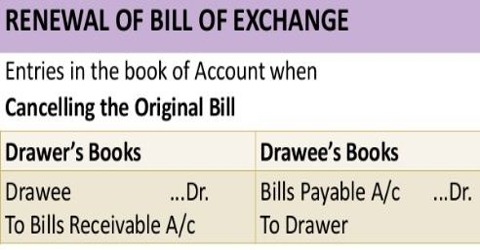 Renewal of Bill of Exchange

When the acceptor of a bill knows in proceed that he will not be capable to assemble the bill on its due date, he may move toward the drawer. When the acceptor of a bill finds himself unable to make payment of the bill on the due date; he might ask for the drawer of the bill, before it is due, to cancel the original bill and draw on him a new bill for an extended period. This is called renewing a bill of exchange.

Sometimes, acceptor of a bill finds himself not capable to assemble his acceptance on the due date. So he might move toward the drawer of the bill before the maturity date arrives, to cancel the old bill and draw a new bill with extended date. The acceptor in this case will of course have to pay interest for the extended period. Thus the termination of the old bill maturity in return for a new bill for an extended period is called “renewal of a bill of exchange”.

There are two additional ways to renew a bill of exchange:

What is the functions of accounting?

The principles of effective Internal Control